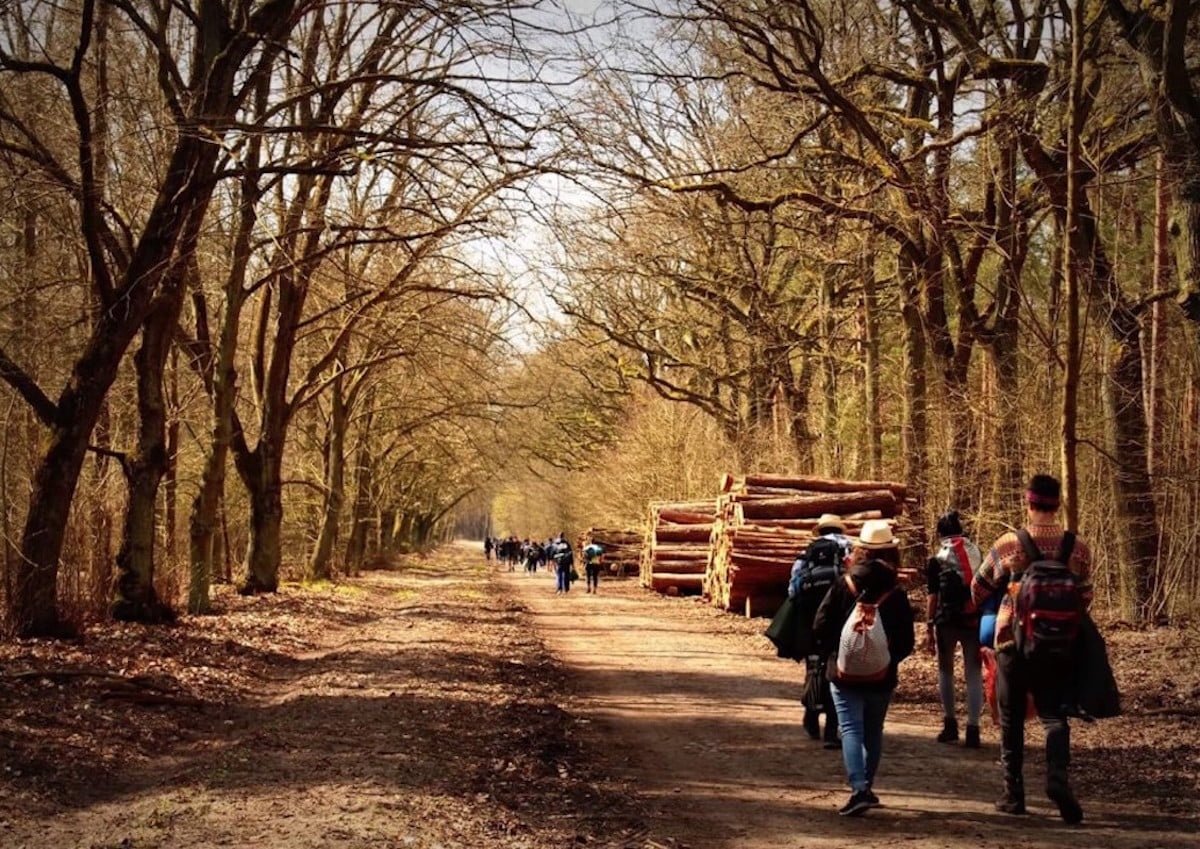 “Five kilometres left!” said Rabeeh, one of the organizers of Frans’ Hike. The regulars, who had been to hikes with Father Frans and Rabeeh before, knew that there was still far more than five kilometres left to walk. They didn’t know how many exactly, but they knew Rabeeh wasn’t telling the truth.

Father Frans was a Dutch Jesuit who came to Syria in 1966 and settled in Homs. He established a community centre and a farm (Al-Ard) near the city, where he worked for the betterment of society, and in particular promoting harmony and dialogue among Christians, Muslims and other kinds of people. He took care of disabled people, and tried to create a community that values everybody. And one of his most famous legacies is Al Maseer.

Al Maseer is a group activity, a hike, in which people from all backgrounds, religions and beliefs come together. It takes place every year, and it would be led by Father Frans. In his view, it didn’t matter where you came from, or whether you’re a Christian, an atheist, a Muslim or a spaghetti monster believer. All that mattered was the unforgettable experience you were about to embark upon with your fellow humans.

Al Maseer is a group activity, a hike, in which people from all backgrounds, religions and beliefs come together.

Frans’ Hike is not just about hiking 20-30 kilometres a day, for three or four days. It is a place and time for teamwork, for learning about those who are different from you, and for loving, accepting and making friendships with them. We all would share the same exhaustion and tiredness from the long walk, the same frustration of knackered feet and blistered toes. And we would all be looking forward to the day’s finish point, overcoming the hardship of the long distance through singing, music, chatting, joking, laughing and breaking barriers. We all would be helping each other on the way, pushing each other onward to complete the walk, challenge our limits and go beyond our comfort zones.

My one and only hike with Father Frans himself in Syria was in early 2011. It was an amazing experience, a true challenge to explore nature and meet new people from different backgrounds. We shared the same floor to sleep on, ate a humble meal prepared from humble ingredients, and followed a routine of waking up early and taking on the team’s assigned chores. We then would spend the day walking through meadows, hard terrains, valleys, hills and mountains, and celebrate at the finish line with a delicious glass of wine or a hot cup of tea with new friends. Father Frans wanted to establish that everyone can be loved, everyone is a beautiful living being, and that we all must accept our differences, love each other and be at peace with all fellow humans.

During the siege in Hamidiyeh, a neighbourhood in the old city of Homs, Father Frans took care of the hungry and those in need. He even managed to source grass for food, as all the basics of life were completely absent. He took care of the “flock” in the besieged neighbourhood and refused to leave. And on the 7 April, an inconceivable tragedy took place. An unknown masked man broke into the garden of Father Frans’s church and shot him in the head.

The gravity of the news astonished everyone who knew him and loved him and left us in denial. No one could conceive that a man as compassionate, selfless, generous, honourable and virtuous as Father Frans would be lost. The news was devastating to me. It was particularly heart wrenching that I was unable to go to Homs, to attend his funeral or even say my goodbyes.

I was one of hundreds, I believe, who felt that way, but those who knew him more deeply and shared their lives with him had absolutely twice and thrice the agony. Like Rabeeh, who was Father Frans’s godson, Father Frans was Rabeeh’s salvation, his entire family, his sanctuary, his teacher, his friend and his faith in life. And that was the case of many other children and teenagers who found wisdom, haven and care with Father Frans that they couldn’t find anywhere in their world.

Rabeeh is now carrying on the legacy of Al Maseer in Europe. When I heard that it was revived, I had butterflies in my stomach and couldn’t wait to join the next hike. Every time, about one month prior to the hike, I am overcome with waves of excitement and anticipation. I couldn’t wait to meet the other Syrians. Some knew Father Frans, and some didn’t, but were so genuinely struck by his legacy that you almost wouldn’t know that they never met him in their lives. One of the hike’s principles – in my understanding- is to get out of your comfort zone, and don’t group with people you already know. But on the contrary, mix with those you have never met before.

Rabeeh, Rasha Yousef, Magui AlAhmar and Issa Kardouh are now carrying on the legacy of Al Maseer in Europe. Each walk takes months to organise. Not many people know the effort and the hard work that these volunteers do to plan Al Maseer and make it possible from A to Z. This includes liaising and collaborating with community centres, churches, sports halls, transportation providers and a lot more. Their dedication is derived from their love to Frans and his unique message he has for the world.

Rabeeh is now carrying on the legacy of Al Maseer in Europe.

The hike happens every year on 7 April, in memory of Father Frans’s death. We gather in a church to mourn this painful memory, to remember Father Frans, sing to his soul, and allow everyone to get to know his legacies, his way of life, what he believed in and worked for his entire life. The commemoration incorporates videos, photos and speeches from people who were very close to him but also has contributions from people who probably never met him before, but are inspired by his life and shattered by his death. Like Maggie, a beautiful earthy girl, who is one of the organizers. And, Mira, who found in Al Maseer a true shelter from the busy noisy life you live as an expatriate. In fact, for all of us, it revived our souls.

Ironically, Father Frans’ birthday is on 10 April, three days after his passing. That’s why during the hike we also celebrate his birthday. We sing to him, we dance, cut a cake, blow candles and enjoy life as he had always done during his leadership of Al Maseer back in Syria.

When dividing the teams I was keen to be in a team of people that I didn’t know and who were as different from me as possible. You feel anxious in the early morning after a rough sleep, with so little time to get up, wash up and get ready to start the march into nature’s arms. But during the walk, you start getting to know people, their stories, where they come from and what they miss the most in Syria. It feels such a joy reflecting on the anecdotes you hear and the ones you tell. And names – oh names, I feel happy I managed to memorise and keep many people’s names in my head for next year, when we’ll meet again.

This year’s Maseer was my third one overall, and it felt as new as the first time. Though the Maseer is still the same, you will always meet new people, and hence have a new experience every April.

One memorable encounter is a friend I made during the last hike. His name is L.H. I had stereotypes about Syrians from the eastern part of the country, but he showed me the contrary, and made me realise how unwise my preconceptions were. He told us about his life back in Eastern Syria, how he and his family love life, music and dancing, and how open to the world they really are. For some reason, their traditions and way of thinking was obscured from those of us who lived in the Western parts of the country. I realised how I’d missed out on so many beautiful places in my country, and even more beautiful people. His friendship is a true pleasure to me.

This year’s Maseer was my third one overall, and it felt as new as the first time.

I also will remember the companionship of the amazing German and Dutch people who joined us wholeheartedly, as volunteers and as friends. They gave us unprecedented levels of generosity, cooperation, engagement and support. Like Hank, a 70-year-old man who dedicated his entire weekend and his van as a volunteer to provide logistic support for over 250 hikers and for the organizers. Many more German and Dutch people were substantial to the success of Al Maseer. We were mind-blown by their commitment, understanding and attachment to Al Maseer, Frans’ Hike. 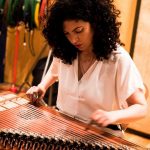