Who is Bilal Ashmouti? How would you introduce yourself?

I am a Syrian musician from Homs and was born in 1997. For me, music began as a hobby and expanded to the study of percussion and Oriental tunes in particular. I did not study music in an institute or college, so I started my learning journey as a personal passion, putting effort into research and reading. I also connected with other musicians and learned from their knowledge and experience.

You entered the world of music early through Sufi music and religious chanting. What prompted you to begin with this? How did it inspire your music?

Music and rhythm have been my focus since childhood. I developed a musical talent and the ability to distinguish different rhythms from an early stage through listening to muwashahat, Qudood, chants and religious hymns. Since I was raised in a religiously conservative family, this type of music was our favorite. That’s why much of my education started with music. The rules of recitation and intonation of the Noble Qur’an require learning the musical maqamat and knowing the rhythm of the letter. From then on, I had opportunities to attend many religious ceremonies and mawlids, as they are known in Syria.

As a kid, they spotted my special talent and put me into a religious singing group for children. Later, I learned Sufi singing and how to play the tambourine. I learned about many singers including the Aleppine vocalist Sheikh Hassan Al-Haffar, who had a great impact on me, particularly regarding the spiritual aspect of music.

You seem deeply involved in rhythm in particular. Why percussion, and what percussion instruments do you focus on?

Day by day, my attraction to rhythm increases. When I think about myself, I see that rhythm is the secret of life and the basis of our existence. Our hearts are built on rhythm, and if we were confused, we wouldn’t stay, the movement of the sun, the rotation of the planets, and the rotation of the earth around the sun and around its center is rhythm; the movement of people, the street, the city and nature are all rhythm and everyone can notice and perceive it.

I tried to delve into the science of rhythm by reading from different books, but unfortunately the source material we have in the Arab world regarding the science of rhythm in particular is very limited, which is why I see that rhythm has not taken its proper place in oriental music, unlike the other sciences. All of this made me go deeper, to research and explore. Among the various oriental percussion instruments, the Riq was the closest. For me, this instrument has historically evolved from the tambourine, to which the cymbals were added later. Since I had some experience with playing the tambourine while I was a member of Sufi choirs, the Riq became the focus of my interest because of its possibilities for musical expression, special techniques in playing and striking that are different from other instruments, and most importantly, it has a sound that distinguishes our Arabic and oriental music in particular.

Hassan Abbas mentioned in his book “Traditional Syrian Music”: “Traditional music in Syria, in all its diversity, remained an art alive through the ages. It was passed on from generation to generation, coexisting and interacting with the music of its neighbors, and developing without losing its authenticity.” Personally, I moved from Syria and from Homs to Jordan several years ago. How do you yourself deal with being in the diaspora, as a musician? Did this affect your relationship with music?

I moved to Jordan at the age of fifteen in 2013. It was a period of intellectual, theoretical, practical and musical transition for me. The concept of rhythm, which had previously for me been limited to singing, expanded. Sufi music includes all kinds of music: classical Arabic traditional, modern Arabic music and western music and jazz music has participated in several projects related to Jordanian heritage. I got to know the music of the Jordan Valley, Sahel and Badia, which includes different rhythms and pressures than you are used to. I also had the chance to meet several musicians from all over the world, and, of course, as a musician who came from Syria, most of the conversations and meetings were about the style of music in the region where I came from. This motivated me to learn about the history of music in Syria. I became interested in the songs of Syrian folklore from across the country. I found myself an ambassador for my country’s music for both He wanted to know more about her, and I found interest from many people in Jordan who still listen to this kind of music, and have a desire to learn more about the heritage of Syrian music.

You are a music teacher at Crescendo Music & Art Academy.  How would you describe the work you usually do?

Yes, I am currently a percussion professor in Kirishindu Academy, teaching oriental rhythms to students individually and in groups of all ages. I also play percussion accompaniment for students of musical instruments, such as the oud group, the violin group and others. I always try through education to show the importance of rhythm, because rhythm and melody are the basic elements of music. I also try to cultivate interest in our distinctive oriental music and rhythms, focusing on old and time-honored examples. They are part of the musical heritage; even if they are no longer used much or heard less we should try to prevent their extinction and to maintain the heritage. What makes me really happy is that I always see interaction among students and the benefit it brings them; this is the result I aspire to in education.

Through Action for Hope, young Syrians displaced in Jordan have the opportunity to connect with their cultural heritage: music, songs and proverbs. We understand the tremendous value of keeping the younger generations in touch with their musical heritage. Can you tell us about it and the other musicians who participated?

Do young people overcome traumatic experiences or challenges at a young age? My involvement with the “Action for Hope” initiative is one of the most important things that helped me in terms of my musical experience. Firstly, it gave me a wonderful opportunity to meet a number of senior professors and benefit from their experiences. Accomplished musicians, such as Professor Fawaz Baqer, Rami Al-Jundi, Mustafa Saeed, Firas Shahristan and Basel Rajoub. Secondly, my academic experience was enriched by enrolling in educational workshops and being encouraged to widen my knowledge of music and rhythms. I also conducted educational percussion workshops for students from different social backgrounds, such as refugees, less-fortunate students, and those with special needs. Through this I saw the impact of music and how it has an important function psychologically, physically and even materially. Most of the students who graduated from this programme had opportunities to work with music in many jobs.

Traditional music is one of the central elements of the intangible cultural heritage of communities, groups and individuals, and from its preservation, people preserve a large part of their memory and the foundations of their identity. In your opinion, how can we contribute to preserving this precious heritage for future generations?

For me, I see that commitment to the authenticity of the musical identity of a region is through its instruction, notation, education and preservation, which is the responsibility of musicians and academics. Unfortunately, Syrian musical heritage is under threat, especially after the migration and dispersal of musicians to many different regions and countries. Heritage would not have become heritage if it were not for its transmission from one generation to another, so I think it is our duty as responsible musicians to preserve our musical heritage through initiatives and activities that spread our music, defining it and teaching it to our children in the diaspora and maintaining it by developing it and trying to integrate it with current music.

What message will you send through your music? Tell me about your dreams in the near and distant future.

This reminds me of a saying I love so much: I comfort the soul with hopes, I watch it… How narrow it would be if there was no space for hope.

Hopes and dreams are a human’s sanctuary from reality. If you ask me about my dreams, there are many and they are endless. But I will mention the most important ones to you. In a world where there is more difference and disparity, where there is more division than unity, may music become the language of communication that unites us. In all its diversity, music has  never divided, killed or caused harm or damage. I hope that learning music becomes accessible to people of all kinds. As for my future goals, I have begun to study oriental rhythms in the Levant. The aim is to preserve, document and record the changes that have occurred, to create a scientific and educational approach to rhythm in easy and new ways, and an alternative to the methods of memorization we use in teaching oriental percussion instruments. I wish I had sufficient support to complete this research and see it on the ground. I hope one day I will be able to release a rhythmic music album that captures the story of displacement and diaspora in which I lived, the war in Syria, and how hope and optimism returned after the despair, tragedies and destruction that occurred. 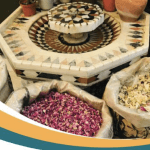 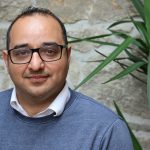