Your first album in Austria, back in 2014, was about the pain of leaving behind your home, family and friends. Does this feeling still influence you artistically?

Leaving a place unwillingly is a very strong feeling, but you also develop different emotions and ideas. After living almost ten years in Austria, you’re becoming part of this community. So the moments of pain still exist, but now with a totally different perspective. Back then I was totally occupied by the idea; even the album title was called Raheel, “departure”.

For some musicians, moving to a new place means experiencing a sense of loss for the instruments or the music networks they have to leave behind. How has your experience been in Austria?

I now have three instruments and when I travel I bring my favorite one, the one that I record with and go on stage with. I broke it once and it broke my heart. I was starting to really play percussion on the oud but I pushed it too much and it fell on the ground and broke. I went to bed crying. This relationship to the instrument is very important.

There are many good oud technicians here in Vienna, and in Germany and France, because the oud has been very famous in Europe, with many major artists. The culture is now becoming more hip, and more people are learning Arabic. There are many concerts, and it’s becoming part of the regular day to day cultural life in Europe. It’s the same thing with food: five years ago, you wouldn’t be able to find Syrian street food in Vienna, but now you can order anywhere. The refugee waves brought a lot of skilled workers: boatbuilders, musicians, doctors, students, cooks. Those people started to work and contribute to their communities, and therefore you can find all of that here.

How does it affect your sense of belonging in Europe to see these changes?

It made it easier to build my relationship with Europe. I had to cut ties somehow with home because it was very tough to choose to live either here or there. But it’s so moving when you go to Berlin to play and people there know your songs by heart and they know the language. My generation is a generation who left Syria. They are all over Europe, and now we try to build a home-like situation. I think all of those changes are positive if we are able to live in an open community in our cities, but if we choose to live in closed communities, that won’t be a very positive thing.

I get a lot of support from people of my generation who like to see the oud played in a new way that they actually can relate to.

Some of the venues you play at are known for putting on “world music”. Do you think anything is changing, where we don’t have to label music in this way anymore?

“World music” is now used for anyone of a different color playing any instrument, regardless of what they do. For example, a non-white European jazz trio might be called “world music”, and that’s really not okay. I think it’s time to present this music differently; if you know there’s an oud playing, you have an idea what to expect. Now there’s this ability to google the musician and listen to them, and they’re promoted on the radio, so people know the music. Choosing to keep on using those terms is becoming old fashioned. But I still use “oriental” sometimes because a lot of the elements that I use are not fully Arabic, such as scales and meters that are Kurdish or Armenian.

Is there something about the physical act of playing that takes you into another space – whether it’s memories of playing in Damascus, or an inner feeling of being at home?

I’ve been playing this instrument since I was eight years old. When performing I always imagine that my universe gets smaller. It’s only me and the instrument. I always keep my eyes closed, because I can’t allow myself to get distracted. When holding an instrument the body touches the instrument. You can feel the vibrations in the stomach. There’s also the tiny pain you feel in your fingers after playing for a longer time. All of that plays a huge role with this intimacy with the instruments. I imagine the instrument as a part of my body. I never chose to learn, but this kind of strange relationship to this instrument turned it into my tool of presenting myself, my tool of expression.

You’ve started amplifying your instrument. How does this work?

I found a very nice solution that only fits this oud: I managed to put a pick-up between the strings that looks very funny, but it’s super cool. Now I’m working more on loopstations, to have more ouds playing at the same time. I’m also exploring more with effects, but I’m really, really careful not to overdo it. The thought of having the loopstation on stage scares me, just like anything new, but it gives me more options to play with new meters, to improvise, to explore. It doesn’t work with all the tunes because you have to repeat things, so there might be more songs that stay 9/8 or 7/8 the whole way through. But it gives me new possibilities that might lead to new projects.

The passion you have for playing with a rock band in particular is really visible. Why does it bring you so much joy?

I’m very lucky to be surrounded by musicians that add a lot to me on a personal and musical level. I’ve always been a rock fan, but I felt excluded because I play an oriental instrument and speak Arabic. I was pushing more and more on the oud to play classical Arabic music, until I began trusting myself enough to start composing my own music. I gained a lot of self-confidence that allowed me to cross some barriers on my instrument and to play the music was first in my head. I’m finally playing it on stage the way I imagined it.

I’ve had a lot of comments saying that I should drop it and play guitar, because In Arabic culture, we have this holy attitude around the oud, about how it should be played and presented. But I also get a lot of support from people of my generation who like to see the oud played in a new way that they actually can relate to. If you just think of it as a tool of expression, you can start to imagine differently. It’s not about the sound of the instrument, it’s the musician himself.

In the past you’ve talked about how meeting Basma Jabr opened you up to vocal music, poetry, writing lyrics, and reconnecting with your heritage through old songs. Do you carry this over into your new music?

We stopped doing the duo project, but she’s still with me. My new album is coming out with the first lyrics that I wrote: I’ve written my first song! But I’m also starting a new project with a Turkish country singer, moving into a different language. I’m also focusing more on instrumental music and getting more out of my instrument voice-wise.

The new song is called “Prison”. Roughly translated it says: “Tell me how can I reach you, my beloved one, when my prison is part of my body? How can you hear me if I’ve ever tried to sing, as long as my language is a foreign one? Just tell me how.” It comes from the experience I had with Basma, working together for more than two years writing those songs. It’s very much what we say In German, “Abschluss”: a closing of a very important stage where I worked more on the duo as oud and vocal, and now opening to focusing more on new sounds.

For this new album, many of the tunes were recorded already in different variations and with different bands, but now for the first time I am trying to re-record them with a new sound that I always wished for. I always had a very classical voice, when I wished for distortion and drums. So we called this album Second Time, because it’s the second chance to record these tunes.

Exactly. Our music heritage arrived this way, people telling the stories and songs generation after generation. Now, with the fourth album, I’m presenting some older ideas and songs in my new vision, because I don’t want those tunes to be forgotten. There’s also a fifth album coming which is the other step, experimenting more with my instrument in a trio.

The title for that third album with Basma – The Songs We Still Remember – does it imply there are a lot of songs that you don’t still remember?

Yes, somehow. I got to know those songs from her, but it was after being in Austria for eight years. Such major events like what happened in my country, the amount of pain, starting a new life here… your brain makes a turning point where you try to avoid or forget. I lost a lot of friends, a community, my family, my life as it was. Somehow your brain pushes you away from those so that you have vague memories. With that album it’s not that we were trying to remember the songs exactly as we listened to them. We embraced how we remembered them, with the effects of everything, and even mistakes. It’s really the process, a work in progress, and we really tried to do it authentically. We embraced our mistakes in the studio, even leaving in places where our breathing is on the microphone. We also embraced that with the album cover: we wrote out the title with a mistake, but kept the scratched out part on the album cover.

You’re reinterpreting mistakes as part of the process of remembering. It’s sort of a folksong-like approach to accept that songs change. Because of recording technology now we’re used to designating things as “the definitive version”, but forgetting and remembering – that’s how songs change and develop over time.

Exactly. Our music heritage arrived this way, people telling the stories and songs generation after generation. Now, with the fourth album, I’m presenting some older ideas and songs in my new vision, because I don’t want those tunes to be forgotten. There’s also a fifth album coming which is the other step, experimenting more with my instrument in a trio.

What is it like to collaborate with musicians from so many different nationalities?

I don’t really believe in standard borders. In Syria, we have so many ethnicities, religions and different heritages that I got to experience. A lot of it I actually discovered after I left: I discovered the Kurdish part of Syria here in Vienna, and I discovered the southern part of Syria from Sweden. We come from a country where we are presented as Arabs or Syrians, an identity portrayed on national television, but I worked with a friend from the Kurdish parts of northern Syria, where they have a totally different heritage. I believe more in chemistry between musicians than nationality. I think it’s your personal heritage that makes you richer. 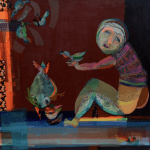